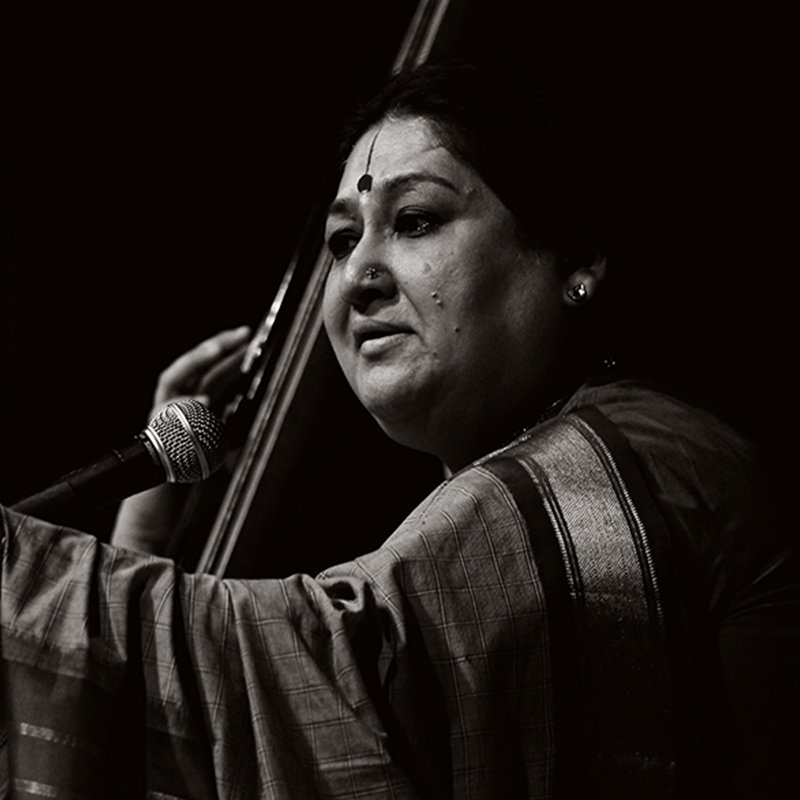 Born into a musically dedicated family, Shubha Mudgal has been trained by some of the finest musicians and musicologists in India. Trained by eminent scholar-musician-composer Pandit Ramashreya Jha "Ramrang", she also received guidance from Pandit Vinaya Chandra Maudgalya and Pandit Vasant Thakar. She later learnt stylistic techniques from well-known maestros Pandit Jitendra Abhisheki and Pandit Kumar Gandharva. She also received training in thumri from Smt. Naina Devi and is thus a versatile and popular performer.
In addition to being a performer, Shubha has also won recognition as a composer. She is the recipient of numerous awards including the Padma Shri from the Government of India in the year 2000, and the Gold Plaque Award for Special Achievement in Music at the 34th Chicago International Film Festival, 1998, and the Yash Bharati Samman from the Government of Uttar Pradesh in 2015.

She has also been closely involved with several projects related to music education in India. Formerly a member of the Central Advisory Board of Education constituted by the Government of India, Shubha also chaired a focus group discussing the need for introducing an arts education program in mainstream school education during the National Curriculum Framework 2005. Shubha Mudgal was also a Nana Shirgaokar Visiting Research Professor for traditional music at Goa University.
Shubha Mudgal has also been actively involved in efforts to strengthen artiste's rights. Along with tabla player Aneesh Pradhan, Shubha Mudgal has established an online distribution platform for musicians specialising in diverse forms of Indian music through their website www.UnderscoreRecords.com
Among the many projects they have initiated in their efforts to preserve the rich musical heritage of India is www.SangeetKosh.net , an online encyclopedia of Indian Music.
A dedicated teacher, eager student and acclaimed performer who tours extensively for concerts and assignments in India and abroad, Shubha Mudgal also writes regularly about Indian music.