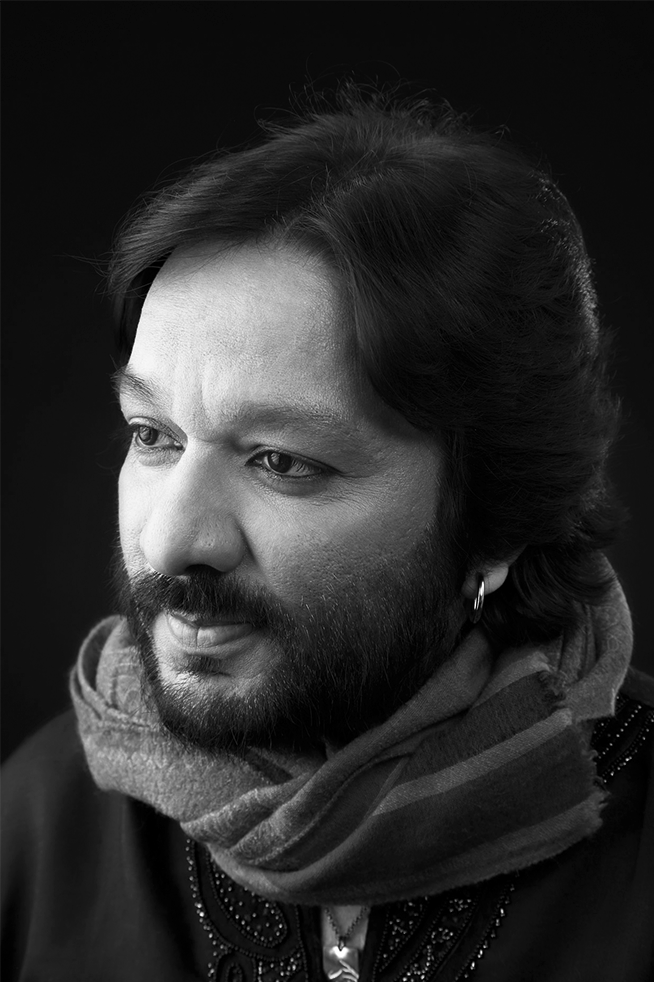 He wanted to be different. He wanted to carry on his father’s legacy. He wanted to make a difference. He has done all that and more. That is Roopkumar Rathod for you.
He has carved his own special niche in the world of music, be it Ghazals, Bhajans, Sufi, Light classical or playback singing. His voice stands amongst the rest, a voice that stirs your heart. The unforgettable award winning song “sandese aate hain” from the film “Border” is just one such example.
Roopkumar is the son of the late Pandit Chaturbhuj Rathod, the classical luminary – an exponent of the rare and arguably the oldest style of singing i.e. Dhrupad. He belonged to the “Aditya Gharana of Jamnagar”. Pandit Rathod has trained and groomed many well known names like Kalyanji – Anandji, Manhar Udhas and many more.
By the time Roop was 18 he became the most sought after Tabla player accompanying leading singers of the country in early eighties. Roopkumar was introduced as a playback singer by Shri Laxmikant Pyarelal in the film, Angaar. Today Roopkumar is a much sought after playback singer, music director and he regularly performs at concerts all over the world.
As is the case with most genius artistes, he is truly a “chaumukha” musician Singing, Percussion and Composing comes naturally to him. At the time he was twenty years of age, he was performing all over the country; solo and with top level musicians. He spent time visiting various music institutions and has guided and instilled a sense of rhythm in many young singers and dancers. It was not long before Roop became restless. The singer in him came to the forefront. He entered the world of Ghazals in the early eighties. “Music India” released a double album of Ghazals called “Parwaaz” – in which Roopkumar sang, composed the music and accompanied himself on tabla – a rare feat not achieved by many. After this he came out with several solo albums and albums with his wife Sunali and many others. A special mention is deserved for the much acclaimed ghazal album “Vaada” under the baton of the illustrious Ustad Amjad Ali Khan and Shri Gulzaar Saheb. He has also done a landmark album under Pandit Shivkumar Sharma of “Nazm” and has sung a duet with Lata Mangeshkar – Meera Bhajan, composed by Shri Hridyanath Mangeshkar. Roop has also collaborated on a jazz album with the internationally reknowned percussionist, Trilok Gurtu and has accompanied him in concerts across the globe. Roop believes in quality work and is extremely fond of fine poetry. He has been fortunate to have sung the verses of “Ghalib”, “Meer-Taqi-Meer”, Kaifi Azmi, Saahir Ludhianvi, Shakeel Badanyuni and Saint poets like Meerabai Tulsidas, Sant Tukaram and Sant Kabeer.
Roop is philanthropist. He regularly contributes to charities and performs in concerts for FPH, Beti, Nirmala and the Armed forces welfare associations. Winnings from the much acclaimed TV show – “Mission Ustad” went to the United Nations Charities.
ARGUABLY THE MOST FREQUENTLY WATCHED VIDEO ON THE YOUTUBE IS MAULA MERE MAULA—A SUFI SONG WHICH HAS CARVED A SPECIAL NICHE IN ROOPKUMAR’S ILLUSTRIOUS CAREER.