KNOW HOW TO START YOUR OWN MUSIC LABEL

KNOW HOW TO START YOUR OWN MUSIC LABEL 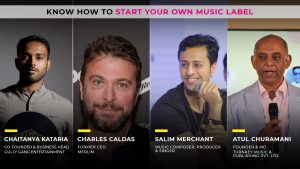 ‘Know How To Start Your Own Music Label!’

The need for setting up your own music label Atul kicked off the session by asking Chaitanya why they felt the need of starting their own label and the verticals involved in it. Replying to him, Chaitanya said they felt a lot of independent hip hop artists were trying to release their music themselves without proper knowledge and there was a need for an organized structure to help them out. So they set up this company to allow these artists to express themselves through their music and help these artists by managing them. Talking about the verticals in Gully Gang Entertainment, he added that they not only manage the artists but also create their merchandise. Chaitanya explained they help the artists by connecting them with the right technicians to ensure their end product meets global standards. They also do distribution marketing and publishing for their artists.

Addressing this point, Salim explained that until a few years back there was no music industry but just the film industry that produced music. Even when the non-film music ‘movement’ started it was very minuscule in comparison with film music. He further added that over the last 7-8 years the independent music space has really grown and is attracting the media’s attention but not as much as film music. But this doesn’t matter much in today’s world. If the song is good, regardless of which genre, it will find its way into the listener’s playlists. Digital revenue generation and break up, Atul asked Charles if a collective like Merlin engages with brands to help increase the revenues. Charles replied saying they don’t on a collective basis because the branding activity tends to be driven by individual artists, and campaigns in particular markets. Answering Atul’s query about the break-up of revenue, he added there are many factors. Citing the income from streaming services he said, that it depends that is how much are the penetration of the streaming services in the market and the number of subscribers. Charles added that in Norway or Sweden, where streaming is a dominant revenue stream as much of the population has subscriptions so the income generated is much higher compared to India which is still a nascent market. He further dwelled that the lockdown is really giving us all the opportunity to rethink our perceived wisdom.
These were a few topics that were discussed. The entire discussion can be
viewed on All About Music and Music Plus’ platforms.