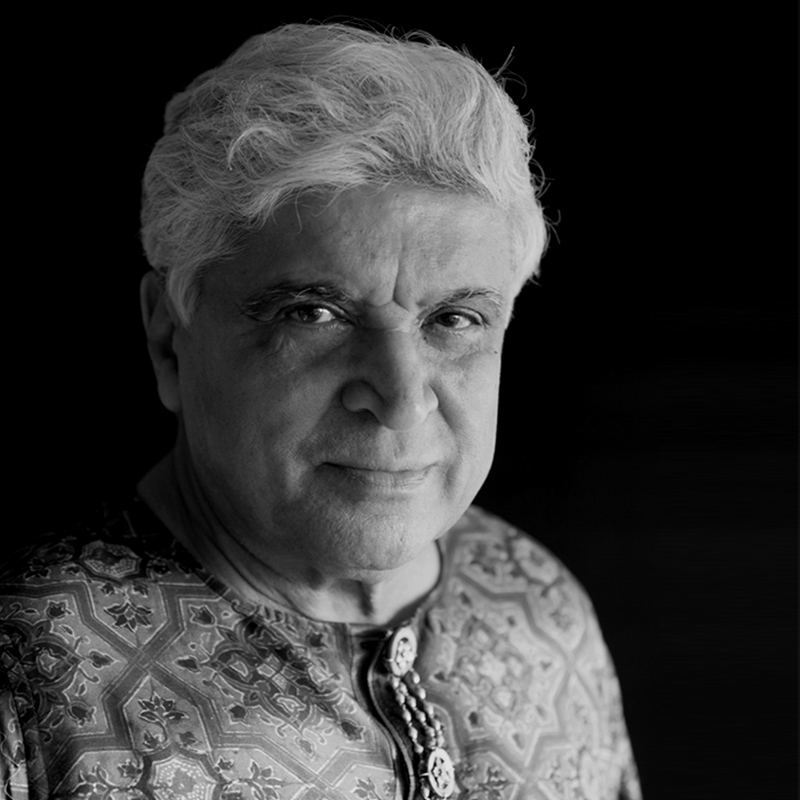 Son of well-known Urdu poet and film lyricist Jan Nisar Akhtar and Safia Akhtar, teacher and writer, Javed Akhtar belongs to a family lineage that can be traced back to seven generations of writers. The highly respected Urdu poet, Majaz was his mother’s brother and the work of Muzter Khairabadi, his grandfather, is looked upon as a milestone in Urdu Poetry.
Javed Akhtar did his schooling at the Cambridge School in Bhopal, Calvin Talukadar College in Lucknow, Minto Circle at Aligarh, and graduated from Saifiya College, Bhopal in 1964.
His body of work can be categorized under four distinct categories:
a) Script Writer b) Lyricist c) Poet d) Activist

AWARDS: Films
5 National Awards by Government of India as Best Lyricist three of them in a row an unprecedented achievement.
15 Film Fare Awards which are considered to be India’s Oscars as Best Script Writer and Best Lyricist.

His first collection of poetry ‘Tarkash' is in its fifteenth edition in Hindi, and ninth edition in Urdu. It has received rave reviews both as a book and as India's first audio book. According to a recent survey done by a publisher’s organization, ‘Tarkash’ is the most sold book of verses in the last 60 years in India. It has been translated in English, Bengali, Gujarati, Marathi and recently in French ‘D’Autres Mondes’ to rave reviews and he was invited to recite at the historic Musee De La Poesie in Paris.

Javed Akhtar has been nominated to Rajya Sabha (Upper House) as Member of Parliament by President of India 2010. He is the architect of the Copyright Amendment Bill passed by both Houses of Indian Parliament which after a long struggle has finally given Copyright royalties to Writers and Music Directors.

He was the Vice – President of International Confederation of Societies of Authors and Composers (CISAC) the first Asian to be on the Governing Board of CISAC. Javed Akhtar is the Chairman of IPRS which is the Government recognized Copyright Society of India.

A multi-faceted personality Javed Akhtar is also a celebrated T.V anchor who has had talk shows on Zee TV, Epic Channel and Tata Sky has dedicated solely to him on which he explains the intricacies of poetry in a language that is simple to understand and relates dohas ( two line poems in Hindi) and urdu poetry to everyday living.

Highly regarded as a social commentator and respected for his liberal progressive values Javed Akhtar is considered one of India’s 50 most powerful people in a survey conducted by India today.

He is married to film actress Shabana Azmi and has two children Zoya who is a writer-director and Farhan Akhtar who is an actor, singer, writer, director, and producer.